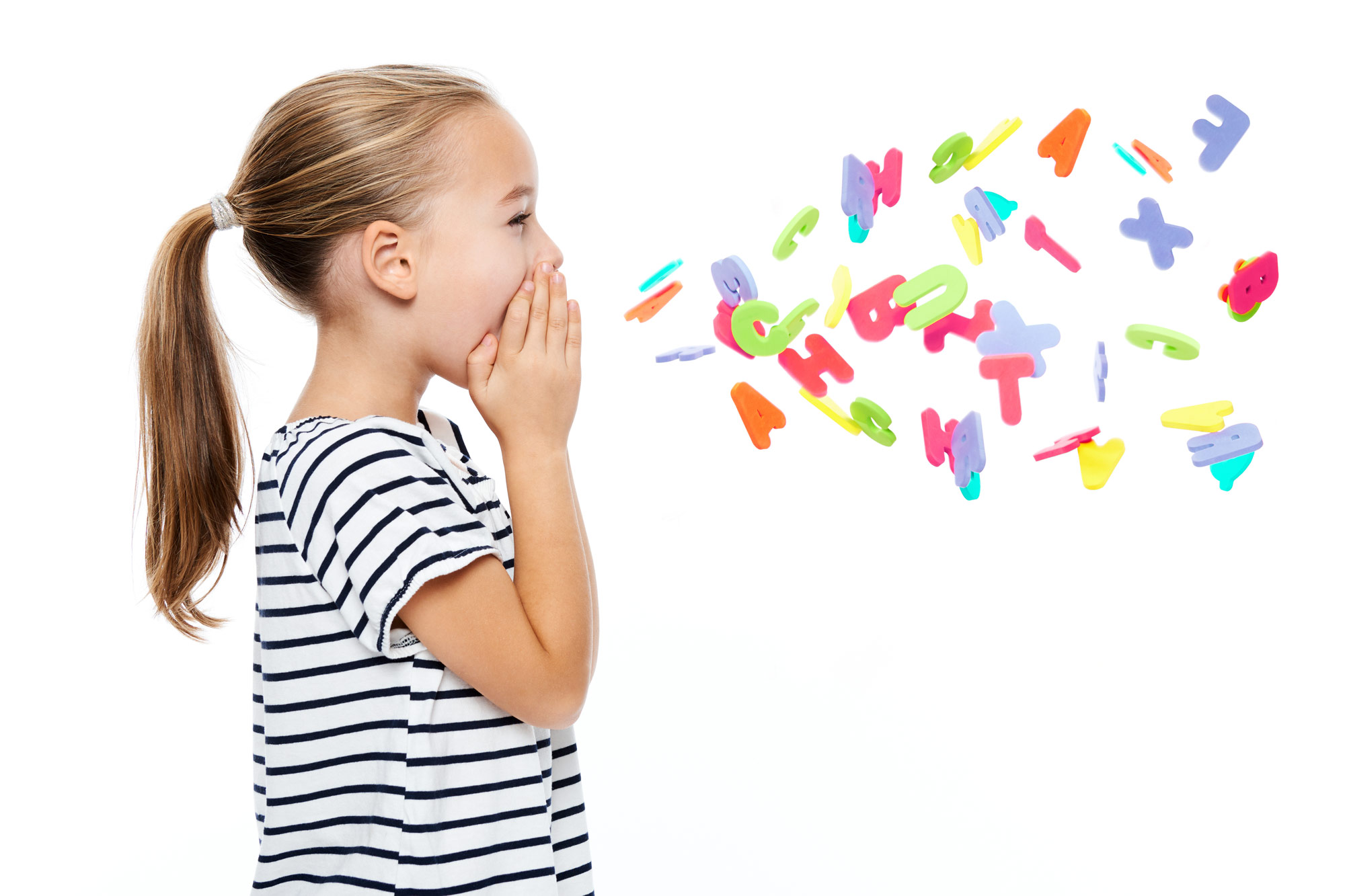 Watching newborns grow from infancy into walking and talking toddlers is exciting, yet not without some stress. Children are essentially little sponges from birth to about two years – looking, listening, hearing, and soaking up everything around them to develop. Although there is a general timeline for specific developmental milestones, pediatricians warn that progress varies from child to child, so it’s important not to compare one’s development to another.

However, slower than “normal” development in areas such as speech and language can indicate a more significant problem. Signs and symptoms of speech and language impairment can appear early, so it’s essential to be vigilant, ask questions, and seek professional advice when concerns arise. For example, if your child does not follow or understand what you say at one year or says only a few sounds, words, or gestures by 18 months to two years – there may be a larger issue at hand.

A language impairment is a disorder related to a child’s comprehension of language and how it is used. Children who have trouble understanding what others say (i.e., receptive language) or difficulty sharing their thoughts (i.e., expressive language) may have a language disorder. For example, specific language impairment (SLI) is a language disorder that delays the mastery of language skills, and some children with SLI may not begin to talk until their third or fourth year.

Although signs of language impairment are distressing to parents, it is important to identify the early signs. The earlier a disorder is pinpointed, the faster treatment can begin.

Signs of a language disorder can appear between three months to 3 years in children. Although it is often difficult to determine if a young child has a language impairment or is just a late talker, there are several indicators caregivers and health care providers can monitor to determine which is the case. Again, children develop at different rates; however, if you detect any of these signs at or around the period of time indicated, it’s wise to consult your child’s physician for verification. 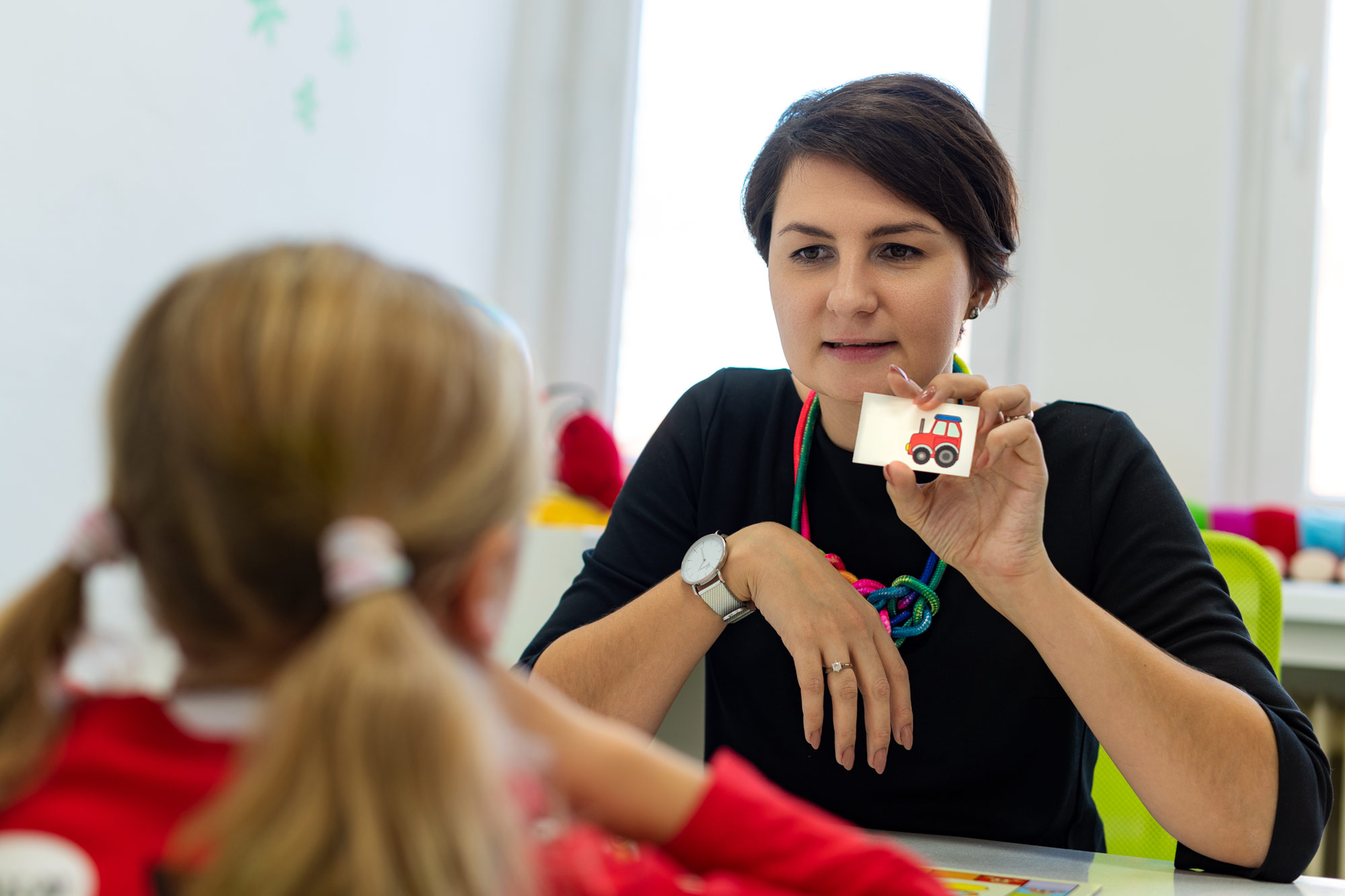 If your child demonstrates one or more of these early signs, it’s time to consult your doctor or a speech therapist who can begin working with them to overcome the impairment.

You can also encourage language development at home with reading and frequent interaction that includes activity narration. For example, as you do things together, explain what is happening, like “I am washing your hair” or “we are eating carrots.” Try to use different words or phrases each time you perform these activities, rather than simply repeating the same thing. Also, if the child lives in a multi-lingual home, speak to them in different languages. Studies show that richer language diversity is better for children’s development.

Children who have trouble producing speech sounds correctly or who hesitate when talking may have a speech disorder. Studies show that approximately 8-9% of young American children exhibit signs of a speech disorder1. Speech impairments in chidren may affect a child’s articulation (ability to make the sound with their mouth) or phonology (understanding the rules of language to use the right sounds in the right places).

Why do kids have speech problems? There are plenty of smart kids that have a lisp or cannot say their “r” or “s” well, which a speech therapist can help correct. Other speech problems may occur due to hearing loss, slow development, or an intellectual disability – or as the result of psychosocial deprivation (when the child doesn’t spend enough time talking with adults), being a twin, autism, selective mutism (the child just doesn’t want to speak), or cerebral palsy.

Listening to your child is the easiest method for detecting signs of speech impairment. Here are some early signs to listen for in children between 1-3 years old: 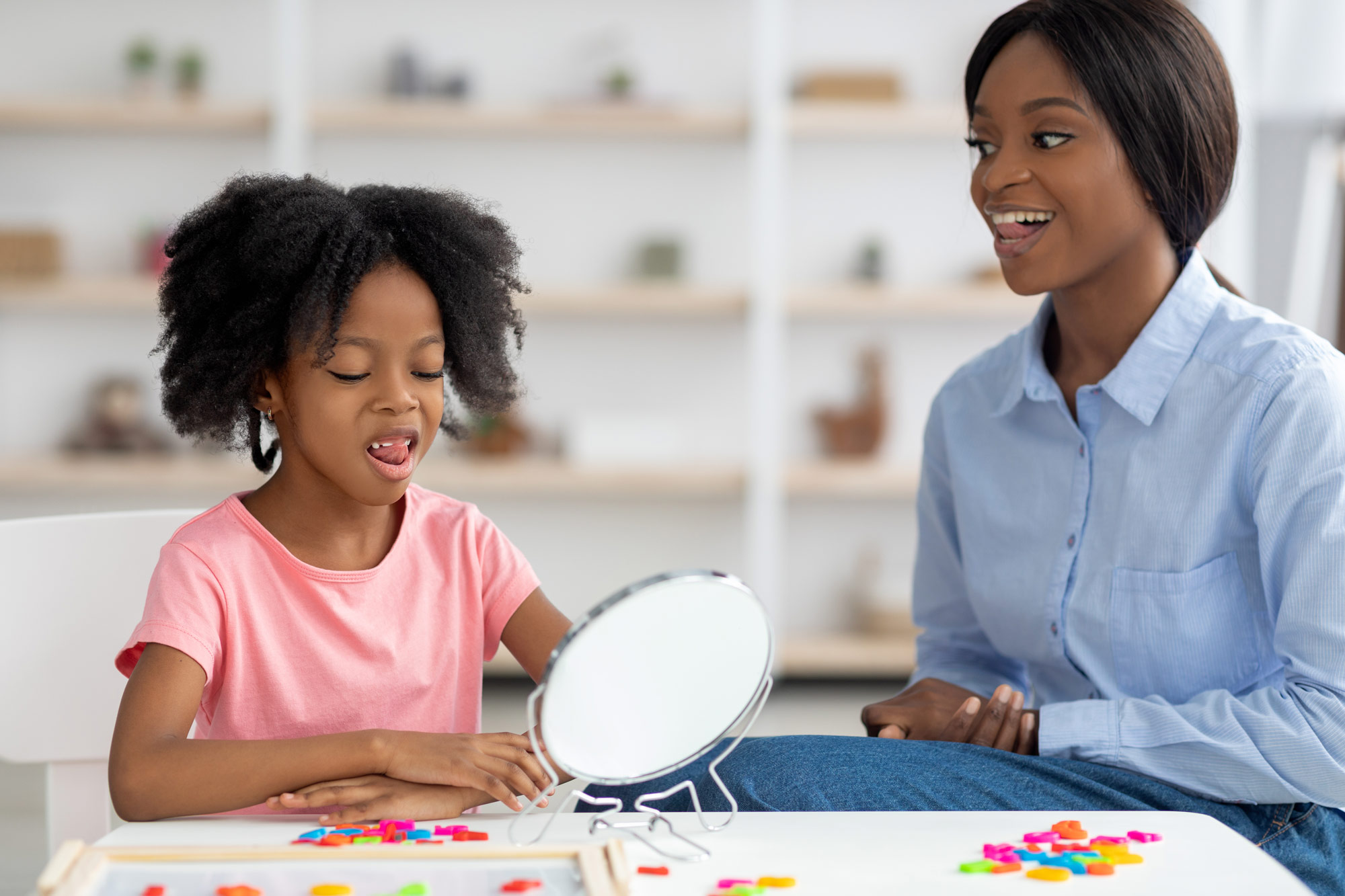 If your child demonstrates any of these early signs of speech disorder, especially the last two, the next step is to consult your pediatrician or healthcare provider. They will likely refer you to a speech therapist to evaluate the child and administer special spoken tests. Based on this evaluation, the speech therapist will create a protocol for treatment.

Although it’s very tempting to correct kids with speech problems as they speak, it’s not helpful and may hurt their confidence. Professionals in speech therapy suggest leading by example and repeating the word correctly while enunciating the problem sound, so they understand how it should sound without feeling corrected.

Stuttering is a speech problem where the normal flow of speech is disrupted. The main signs of stuttering in kids with speech problems include repeating or stretching out the start of words; however, frequent pauses between words can also be a warning sign. Stuttering in children typically isn’t a serious problem in early childhood (under 5 years) as it can be corrected; however, if left untreated, it can create problems down the road.

Stuttering in children may begin suddenly, or it can evolve gradually and go unnoticed at first. Following are some early signs of stuttering to look for in young children. Again, it’s extremely important to address stuttering in children under five years of age, as working with a speech therapist at such an early age can correct the pattern.

Here is are the early signs that indicate your child may have this speech problem: 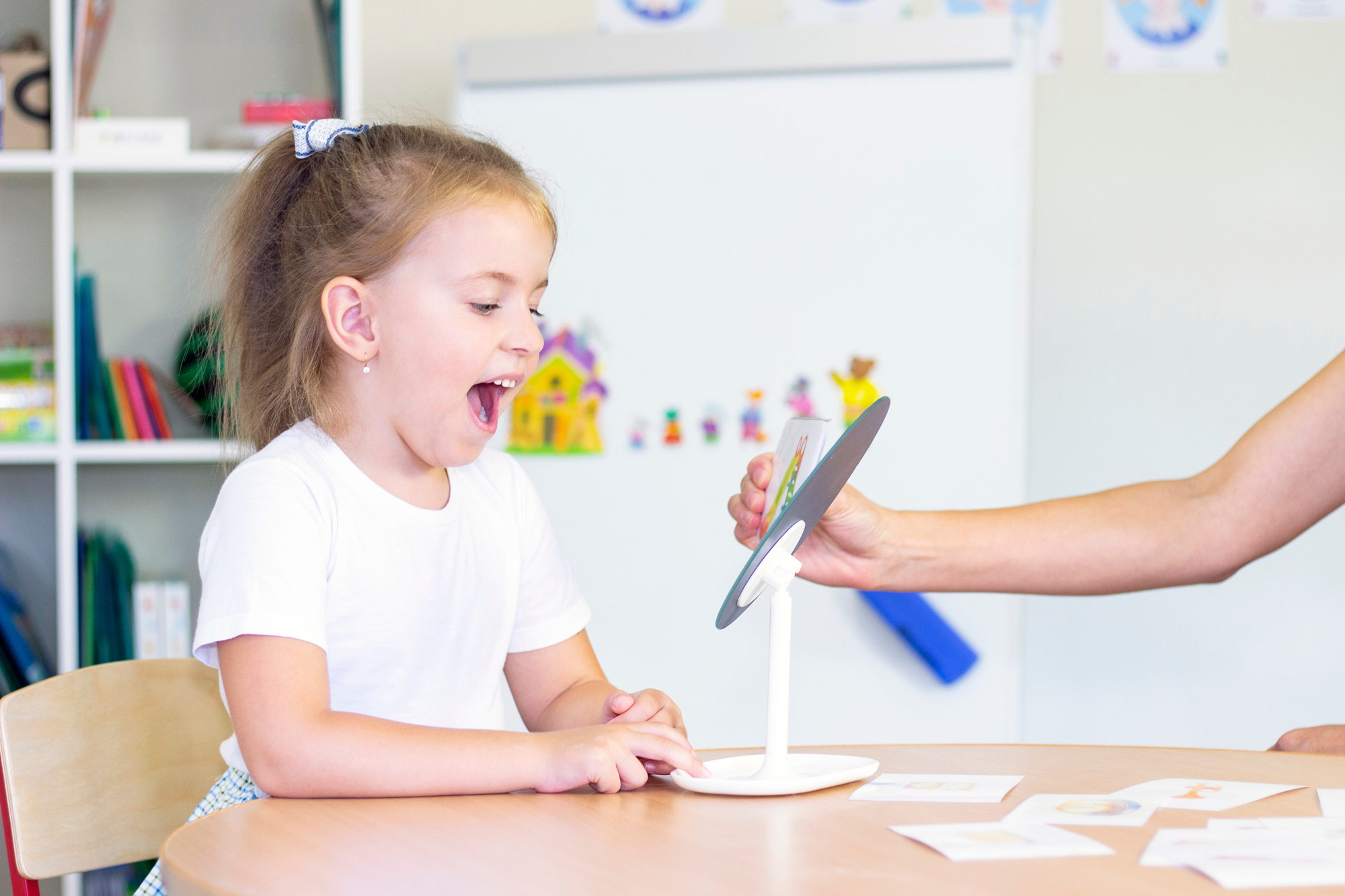 If you notice any of the early signs of stuttering as described above, it’s best to consult your pediatrician, who will likely refer you to a speech therapist.

Furthermore, if your child is stuttering, it’s important to have patience. Although it may be tempting to interrupt them or finish their words/sentences for them, it’s best not to do so. You may think you are being helpful, but it’s likely just lowering their confidence. We recommend slowing your speech rate while talking to your child and giving them plenty of time to communicate, so they do not feel rushed.

Early signs and symptoms of speech and language disorders are stressful for parents. However, it’s important to remember that early detection is paramount to effective treatment that helps children overcome these disorders. That’s where KidsCare Home Health excels.

Founded by a speech therapist in 2003, KidsCare Home Health provides quality in-home therapy for children with speech and language impairments in Texas, Colorado, Oregon, and Idaho. Our convenient professional service allows your child to work with an experienced, highly trained speech/language therapist in the safety and comfort of home while providing parents and caregivers with a convenient alternative to in-office therapy.

If your child exhibits any of the mentioned signs of speech and language disorders, contact KidsCare Home Health for help. We’re standing by to help your child thrive!