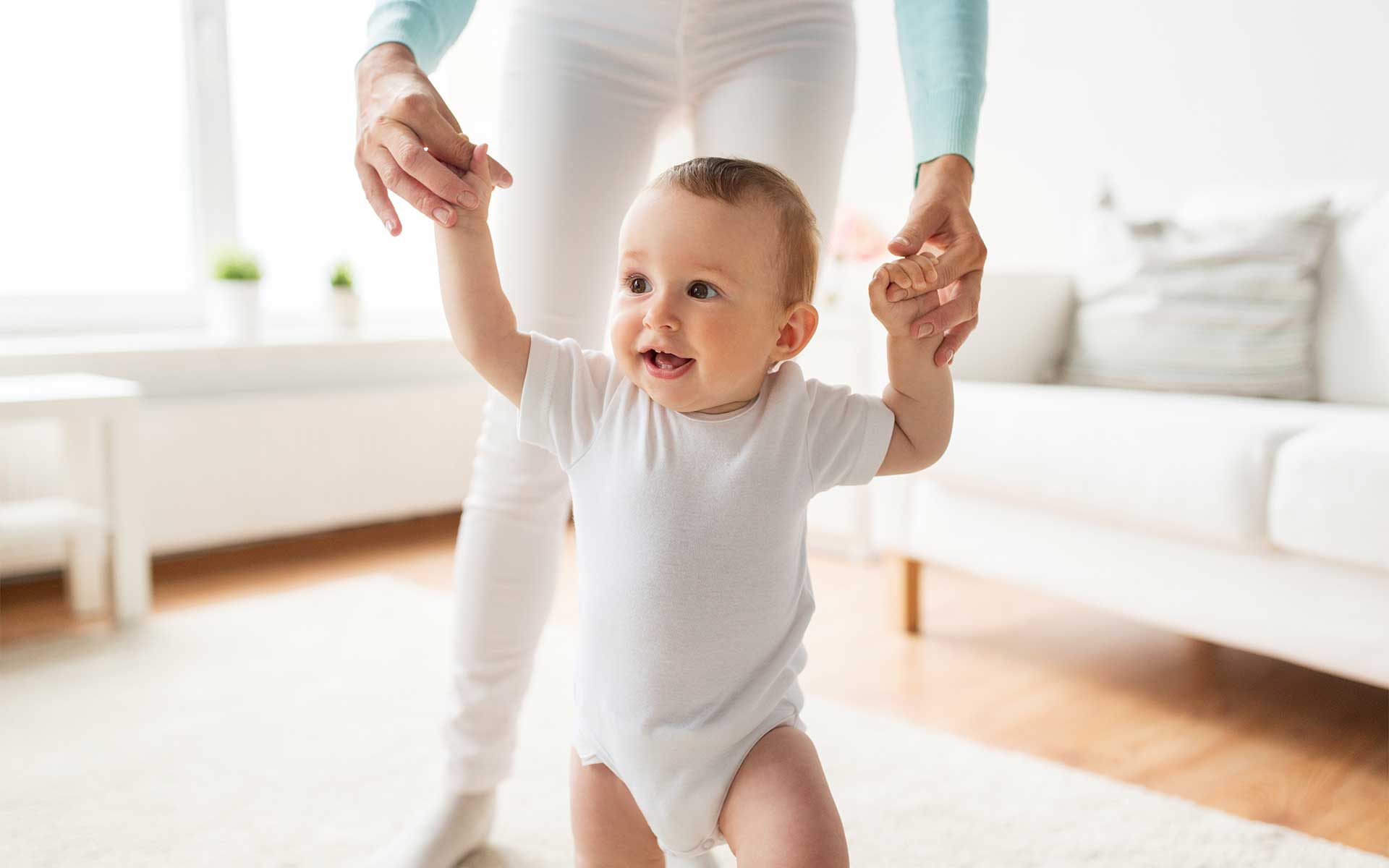 The transitional movement definition, as it applies to babies in their first year, is what occurs when your baby moves from one position to another. This may sound overly simple; however, babies are learning how to “move” from the moment they are born. It’s exciting for both baby and parent as these transitions occur, like rolling over or sitting up without help, and it all leads to the big finale – walking! (or toddling, since even walking takes practice!)

This blog post is a continuation of our series about babies’ physical developmental milestones. From tummy time to rolling for purposeful play, our little ones are busy working on big achievements in year one of life. So, let’s talk about these movement milestones, commonly called Transitional Movements. What is the transition movement or movements? Why are they important? When do they typically happen? We’re covering it all today, including exercises to encourage the process.

What Are Transitional Movements?

When your baby begins to explore and learn how to move their head, limbs, and body independently from one position to another, they are practicing transitional movements as they learn primary gross motor skills. For example, this can look like rolling, getting in or out of a sitting position, getting in or out of quadruped (all fours), getting up into a standing position, sitting back down from standing, etc. Basically, it’s the movements that take babies from one position to another.

There are seven primary transitional movements that typically occur within the first twelve months of a baby’s life, which we are detailing next, including what they entail and when to expect them. 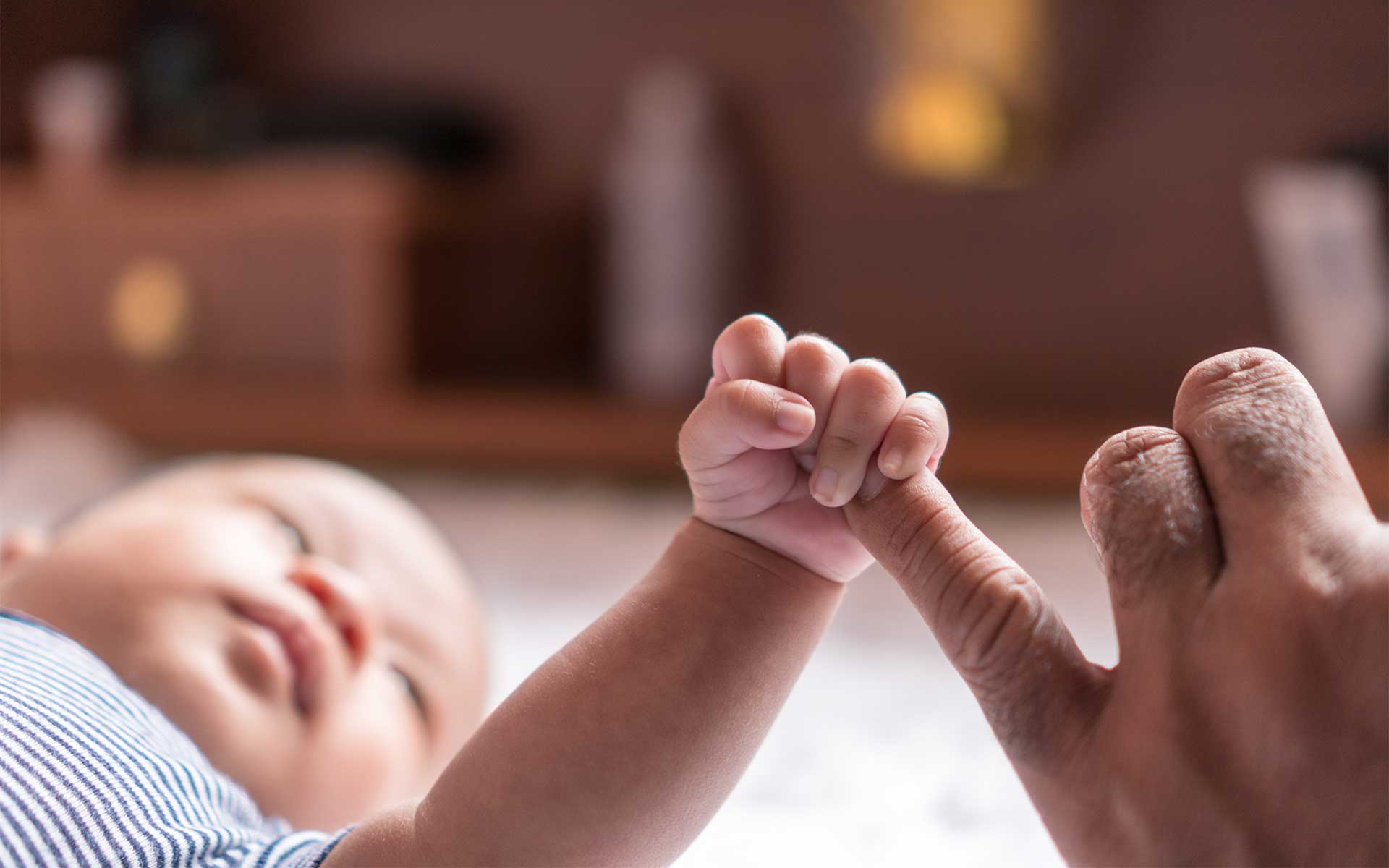 By about the third month, you may notice your baby becoming particularly interested in his hands. This may include staring at them more, opening and closing fingers, making fists, and even grasping things that touch his palms or fingers. These movements can last for weeks or months as the baby learns more about their hands, how they move, and what they can do.

Tummy time is an important part of an infant’s development in the first year before they begin rolling and sitting independently. It’s called “tummy time” because it involves placing your baby on a clean floor or mat, belly down. In this position, newborns will learn, grow, and develop their muscular, skeletal, and nervous systems by discovering and using new muscles that aren’t used while on their backs in the crib, stroller, or bouncer seat.

Tummy time is an ongoing process, and we go into more detail in this tummy time blog post.

It’s important to remember that babies normally fuss when beginning tummy time, but they will grow to enjoy it as their little muscles become conditioned to the new movement. 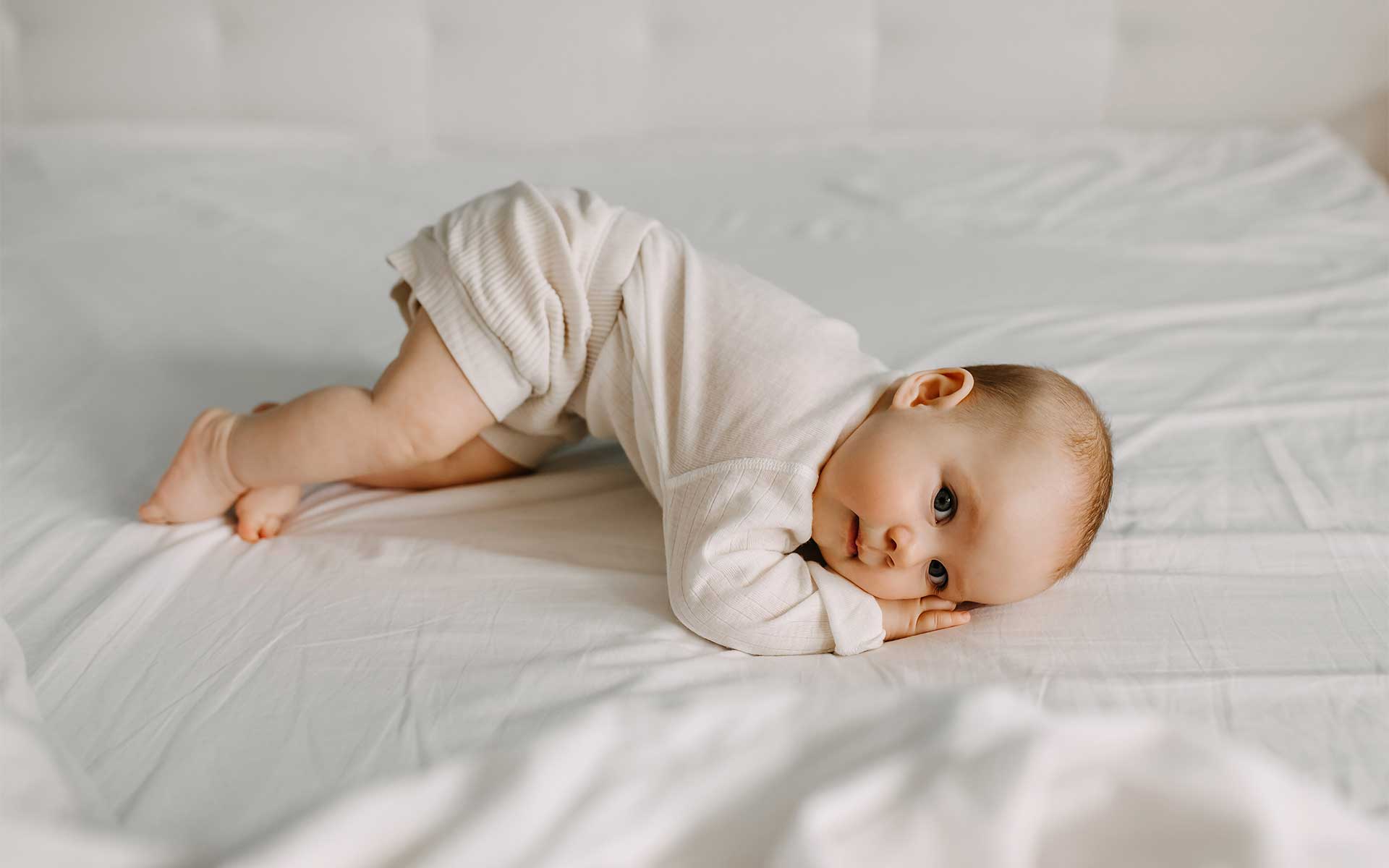 Babies typically begin to experiment with rolling transitional movement during tummy time or at about 4 – 5 months. Rolling is a learned skill, so try not to interfere and move (or roll) them over. Babies need to learn that rolling is caused by their intentions and movement, not the magical hands that lift them from one place to another. Rolling will begin with front to back and vice versa until they have it down and can roll over independently.

Sitting up is a big milestone for babies, and babies can typically sit well without support between 6 – 9 months. However, sitting is a transitional movement because it also needs to be learned by the baby, rather than just magically happening when the caregiver moves them from lying down to sitting up.

You can encourage sitting up movement any time they are lying down, like on the changing table. Instead of lifting your baby up from a prone position on their back, sit them up first and let them feel it – then pick them up. Letting them get used to a sitting position will help them get used to the new position.

As a transitional movement, standing will be awkward for babies at first. Most parents can expect to experience this transition between 9 -11 months. The movement happens when baby slowly moves from a kneeling position or rocking on the knees and grasps something stable to pull themselves up. It’s important to remember that they are learning something new, so there will be falls and spills as they continue to try.

Although it’s instinct to want to rush over and help, it’s not always necessary. Letting your baby learn the process of standing up and what happens when they let go is important (which is usually plopping back down on the floor because sitting back down is another skill to be learned). There may be tears, yes – but if they are in a safe environment under careful supervision, there should be nothing to overly worry about as they experiment with this new transitional movement.

Once a baby can stand up independently without holding on to something, they are usually ready for the next transitional movement – walking!

Walking typically happens after standing upright unassisted has been mastered. After all, standing and walking are about balance, and babies are discovering it for the first time. For this reason, your baby’s first steps will be hesitant and awkward. For example, she will likely “walk” with her legs spread, feet turned slightly inward, hands stretched out to the sides for balance, and grasping at things to help.

However, the more she practices walking upright without help, the better she will become as leg muscles get used to the motion and balance improves. Try not to assist too much and let your baby learn this new movement with freedom under your careful watch.

Why Are Transitional Movements Important?

Now that we’ve covered the seven primary transitional movement milestones let’s get into the motivation behind the practice. What are the main goals of the transition movement?

Transitional movements are critical to development because they help babies learn how to move independently. Their little minds will begin to understand that they can move and explore on their own – and there is so much to experience!

Transitional movements will help them learn how the body functions through cause and effect. They learn about exploration as independence grows and curiosity propels them to try new things. During transitional movements, babies learn how to manipulate muscles and limbs and how to problem-solve as body awareness develops.

It’s important to remember that every child will develop on their schedule, not a pediatrician or neighbor’s baby’s schedule. Achieving transitional movements is not a race – it’s a journey of discovery and learning. However, if you or your baby’s pediatrician are concerned with progress in any area, there are some exercises you can do to encourage things along.

For example, you can use toys and other baby-friendly objects during tummy time to entice rolling, which you can read more about in our blog, Rolling for Purposeful Play. When it comes time to move on to standing upright, you can encourage them by placing a high-value object on a surface they have to stand up to reach. Guide them toward support to stand (a table leg or surface edge), and show them how to do it – then let them try to stand upright to see the object as well.! 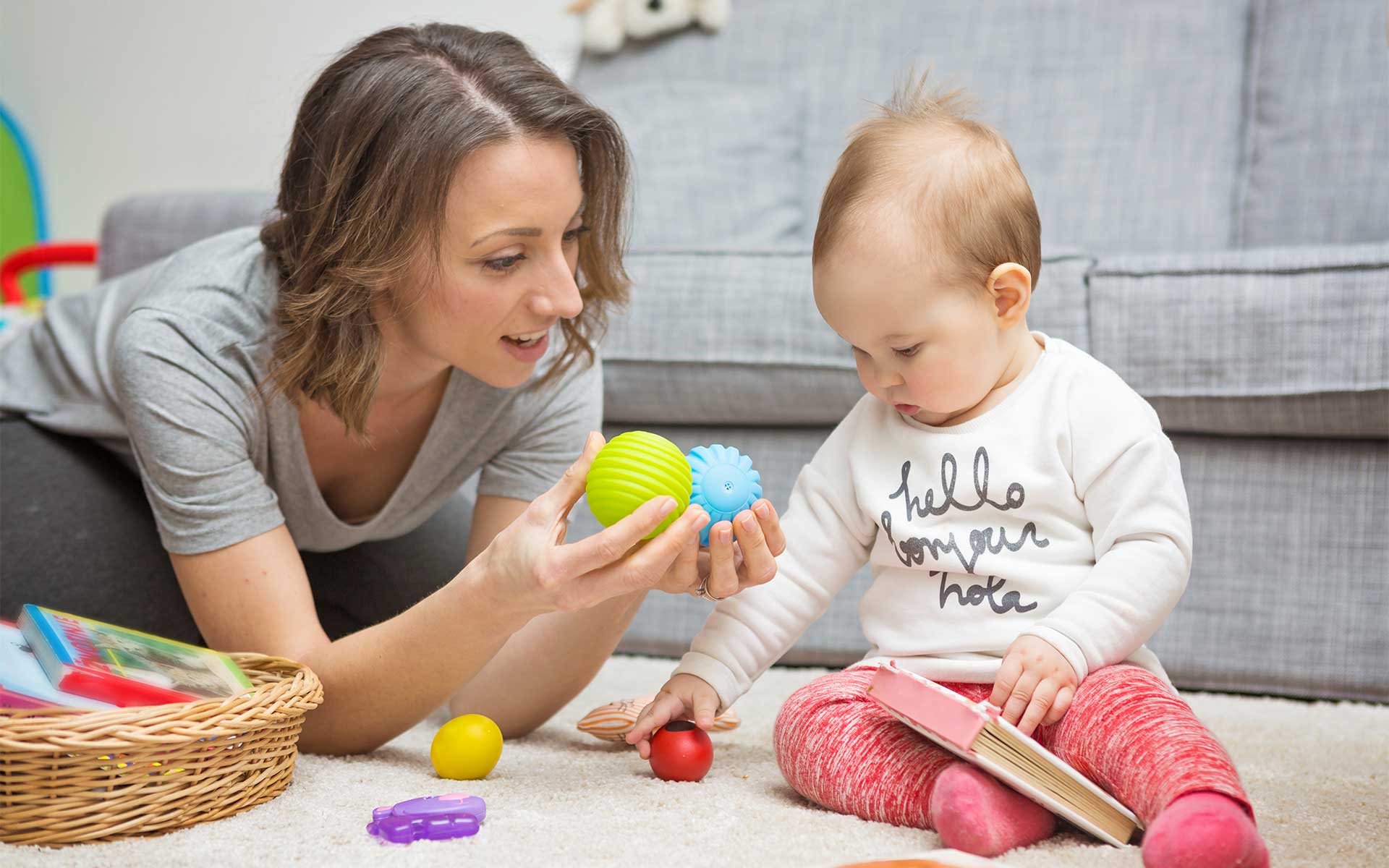 You may also want to consider in-home pediatric occupational therapy, like KidsCare Home Health. Our skilled pediatric therapists work with children of all ages in occupational, physical, and speech therapies and nursing. Our care happens in the comfort and security of your own home under the supervision of our highly trained and trusted professionals. Contact us today to discuss your concerns and how KidsCare Home Health can help them progress with confidence.